WHERE IS ANNE FRANK

Ari Folman
Film
In production
Anne Frank
Ari Folman
Walking The Dog
2D
Animation
Where is Anne Frank brings Kitty, the imaginary best friend that Anne Frank wrote to, in her famous-diary, magically to life. The film is set in the present day and
Kitty is embodied as a young girl, coming out-of-age, who goes on a quest to find her friend Anne Frank unaware of her tragic fate.

Where is Anne Frank brings Kitty, the imaginary best friend that Anne Frank wrote to, in her famous-diary, magically to life. The film is set in the present day and Kitty is embodied as a young girl, coming out-of-age, who goes on a quest to find her friend Anne Frank, unaware of her tragic fate.

While “Where Is Anne Frank” and “Waltz Bashir” are dramatically different in some ways – the former is a fantasy based on real events, the latter an autobiographical take on Folman’s time in the Israeli army – they both use sophisticated and dramatic animation to tell wartime stories to which Folman has a close personal connection...“Anne Frank” feels like a consolidation of his strengths and an attempt to explore new areas in a subtler way...it’s another daring and provocative use of animation with the power to haunt those to see it...  Folman makes marvelous use of different looks: The flashbacks are dark and menacing, with Nazi soldiers represented as long, cloaked figures with swastikas adorning their black cloaks, while the present-day scenes are lighter and less stylized...Folman finds a way to give us the ending we want, and then make us face the ending we have to take. And he ties the past and present together…

This beautifully made film takes an entirely different route than previous film projects, by making the imaginary young girl Kitty, the figure Anne was addressing her diary entries to, a real person on a journey to find Anne Frank in present day Amsterdam and to learn what happened to her. Folman, who wrote as well as directed and among other notable past projects made the Oscar nominated Waltz With Bashir, paints a picture that young audiences should embrace, while also weaving in the current day crisis of refugees from war torn countries just trying to survive themselves.By incorporating Anne’s story and all she stood for, it renews the power and poignancy of the word, the words of an innocent 14 year old who believed in the ultimate goodness of people, even when that belief failed her. Folman, working with animator Lena Guberman, creates a pastiche of monochrome visions of the present, yet brightly colored versions of the past meant to represent the way Anne Frank looked at the world, no matter how dire things were. An astounding 159,000  drawings from 14 countries were used in the creation of this powerful warning from the past, and its startling relation to the present...Bringing Kitty to life as an actual person in present day Amsterdam is an inspired stroke by Folman, and her relationship with friend Peter who runs a shelter for undocumented refugees brings everything full circle in order to resonate more than you could ever imagine. This isn’t just another retelling of the Anne Frank story, but rather a complete reinvention that should resonate in the hearts of the young audience at which it is aimed.

Where Is Anne Frank spins around exceptionally engaging central characters, expresses the story’s unspeakable sadness with eloquence and sensitivity, and winningly captures the intelligence, humor and adolescent exuberance so evident in photographs of Anne Frank and in her writing... There’s something surprisingly urgent in the way Folman and company turn clean, simple lines into full-blooded characters. It’s not kid stuff the way Anne’s brow furrows with worry, and the tears of her beloved Kitty, when she learns what happened to Anne, just might knock you sideways.

Ari Folman’s “Where Is Anne Frank” is such a vital, creative, and sociopolitically urgent modernization of a classic Holocaust story that most kids won’t notice or care that it exists in the service of clear moral instruction. As anyone familiar with Folman’s previous forays into animation (“Waltz with Bashir” and “The Congress”) can imagine, this is no ordinary cartoon rendering of the unimaginable...As sophisticated as “The Congress” ... and as conceptually brilliant as “Waltz with Bashir”...Lena Guberman’s rich and playful animation is always up to the task of bringing such action to life. She flirts with myth and caricature in a way that flattens history into imagination, and the flashback scenes unfold against a backdrop of physical miniatures, a subtle masterstroke that helps grip the entire film in an unshakeable sense of reality.

A fervent, heartfelt and visually wonderful animated film from Israeli director Ari Folman, who made his name with the animated historical satire Waltz With Bashir in 2008. This is a kind of reinvention or fantasy reboot, reading the story again through a contemporary lens and giving it a kind of YA identity; not inappropriate, given that Anne Frank was arguably the great ancestor of YA… Bold and startling visual compositions…Folman has created richly imaginative storytelling which unselfconsciously mixes the historical, the contemporary and the supernatural.

GRADE A. SPELLBINDING. This hand-drawn animated vision, as if created digitally, is wondrous and magical. There’s great depth to the environments given that some of the backgrounds were first created as physical miniatures with the drawn characters brought in later…The extent of the detail in the production design, with its bright color palette that reacts distinctively to the opposing time periods and multiple locations across, astounds for its meticulousness… Tacitly, what Folman seems to demand is that if we are going to co-opt Frank’s former abode and her private thoughts on the book that’s become synonymous with her, then we must also address the full extent of the unspeakable degradation she endured and how our apathy and lack of empathy are allowing other abhorrent injustices to occur right in front of us. The climax to “Where Is Anne Frank,” brims with hope and sincerity that could label as sentimental, but in the context of this transcendental emotional expedition, it’s an earned necessity to believe we can actually grow and genuinely care for others.

There’s much to admire here, particularly in Karen O’s electronic score and a striking visual approach which features something of the trademark trippiness that characterised Folman’s earlier animation, Waltz With Bashir.

The superb animation Where Is Anne Frank by Ari Folman is a standout gem. There are lots of films about the refugee crisis that have been made over the past decade, as refugees flooded into the continent after the so-called Arab Spring, but this one stands out for being family-friendly and holding the old colonial powers to account for commemorating figures such as Anne Frank but forgetting the lessons of her life when asked to show sympathy with those fleeing war zones...The Israeli director is an expert at coming up with “meta” ways to tell familiar stories using the power and possibilities of animation...Even so, the conceit behind Where Is Anne Frank may be Folman's best yet... The animation, led by Lena Guberman, is also fantastic in how it lets the story take precedence. Yet it's made up of 159,000 individual drawings created in 15 countries using a wholly new technique by combining static backgrounds with classic, animated figures in 2D. The Hinterhaus was created as a miniature model, which enabled the filmmakers to create images of real scenery recorded by actual cameras. Drawn figures were then placed onto these backgrounds as animation. It’s a technique that’s as innovative as this brilliant film. 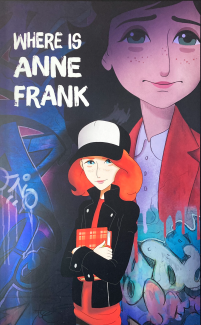